Autonomous delivery robots are often grouped together with autonomous cars, as far as legislation is concerned. Indeed, some of the key principles, and also some of the technologies used, are similar. In both instances, devices are equipped with:

Those elements function with little or no human input, allowing the vehicle or the robot to move around safely. However, there’s one major difference that cannot be overlooked: delivery robots transport goods, while autonomous cars transport passengers.

Legislative frameworks that cover both autonomous cars and robots with little or no differentiation between them do not reflect the specifics of each, and limit the development of both. Separate legislative provisions are necessary, but in many countries, they are still lacking.

In this regard, the gap between the EU and the US is still very wide: in the US, in many states, laws are adapted to the differences between self-driving cars and autonomous delivery devices, while in the EU, governments often group together the two and use blanket legislative measures for both.

In this article, we’ll look into the current state of autonomous delivery legislation in the EU and in the US, in regards to the distinction between autonomous cars and delivery robots.

Autonomous delivery legislation in the US vs. EU: flexibility & precision vs. general provisions

Legislation is one of the most important factors that can either slow down or speed up the development of autonomous delivery solutions, as it defines the specific restrictions, provisions, and conditions of their testing and deployment.

In the EU, many countries do not distinguish between autonomous robots and autonomous vehicles used for the transport of passengers. As a result, they have blanket legislation for both, with requirements that are sometimes only relevant to autonomous cars, such as

In the US, on the other hand, the legislation makes a clear distinction between delivery robots and autonomous cars. For this reason, large-scale testing and deployment of autonomous delivery solutions are possible and face fewer obstacles and hurdles there.

Legislation will inevitably catch up with the nuances that differentiate autonomous delivery and passenger transportation over the next few years, but the EU might remain conservative and cautious, for reasons that we’ll outline further in the article.

There is another important differentiation to make, as far as autonomous delivery robots are concerned:

Although this division is not yet reflected in EU regulations, this is one of the first steps to adapt legislation to autonomous devices, similarly to the US. Speed limits, signalization, minimum and maximum size obviously depend on whether the robot moves on the sidewalk or on the road.

Several US states have authorized the use of personal delivery devices (PDDs), either on sidewalks, roads, or both, starting with Virginia, Idaho, and Wisconsin in 2017. The last to join (for now) are Pennsylvania and Tennessee.

The states where personal delivery devices (PDDs) are authorized are:

This makes the deployment of larger delivery fleets possible in a number of US locations, although robot companies need to adapt to different restrictions that are, for the moment, not synchronized. Nevertheless, it’s interesting to point out that in densely populated cities, such as New York, robot deployment has already caused tension between FedEx and the New York City Department of Transportation, and Mayor Bill de Blasio.

Autonomous vehicle legislation in the US is also quite developed, and the US is often stating their intention to remain a market leader. For example, on the website of the US Department of Transportation (USDOT), we can read that the USDOT “is committed to facilitating a new era of transportation innovation and safety and ensuring that our country remains a leader in automation”. For this purpose, they have created an Automated Vehicles Comprehensive Plan that aims to modernize legislation and regulation, prepare the transportation system, and promote cooperation and transparency.

This is only a fragment of the initiatives taken in the US on a local, state and federal level, to facilitate the testing and deployment of autonomous vehicles. We’ll not go into the details of those here, but defining separate legislation for autonomous delivery is a logical step in that process—and it’s not surprising that several US states are taking it.

For the moment, European lawmakers are steering on the side of caution, and autonomous delivery robots for the last mile seem to be relatively low on the priority list. In fact, in European cities we have several limiting factors:

Additionally, we need to consider that sidewalks are used:

In European cities, the tension between these two functions is often higher than in the States, because of their population density and also the fact that European cities are considered to be more pedestrian-friendly.

Most countries in the EU haven’t yet taken specific measures to allow and regulate the use of autonomous delivery robots, neither on sidewalks, nor on roads, and often group them with autonomous vehicles. Autonomous vehicles, on the other hand, are clearly making their way into laws in different member states.

Similarly to the United States, no high-level EU legislation exists for the moment.

Although legislation is lacking, the road is slowly being paved, discussion topics are becoming more defined and granular. We can see that with the following two important high-level initiatives:

1. The European Parliament’s report with recommendations to the European Commission on Civil Law Rules on Robotics (2017)

In 2017, the European Parliament issued a report with recommendations to the European Commission on Civil Law Rules on Robotics. The report provides several general recommendations on the development, deployment and use of robotic, AI and autonomous vehicles or devices.

It touches on key subject areas such as:

The last point is particularly important, and might be the first step towards an EU-wide debate on both autonomous delivery and vehicles. The report also emphasizes on the importance of creating the right conditions for small and mid-size enterprises in the robotics sector to innovate and create new markets.

The European Commission’s Coordinated Plan on Artificial Intelligence (AI), which can be downloaded here, expresses the EU’s willingness to use the full potential of robotics & AI technologies. It states that AI-enabled robotics are a key factor driving productivity, growth, competitiveness and resilience in the EU. The EC urges member states to look into the potential of transport automation and to rethink mobility systems regarding key domains like:

In short, EC sees robotics as a technology with a yet underutilized potential to bring major benefits to the environment, the economy and society at large. 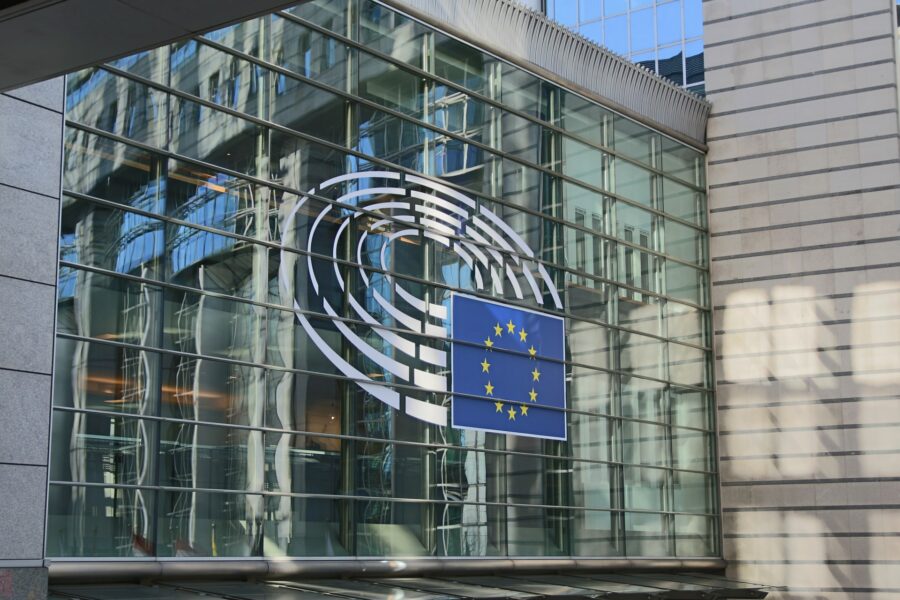 The plan’s objectives, as outlined by the OECD, are to:

EU countries are slowly adapting their legislation to the development of autonomous vehicles, but for now, autonomous delivery robots are seldom taken into account. We could group countries into 3 main categories, as far as AV legislation is concerned:

For last-mile autonomous delivery robots, the mandated presence of a driver is an important obstacle, as it is simply not possible: robots are designed to not have a driver.

For this reason, until EU countries group together autonomous vehicles and robots, the EU might lag behind the States for another couple of years. That is, at least until the European Commission and the European Parliament’s ambitions, as expressed in the plan and report quoted above, translate into country-specific legislation.

In France, however, in 2022 there has been a breakthrough with the new “LOM” law (“Loi d’orientation des mobilités”, or Mobilities’ Orientation Law).

Vehicles with level-3 autonomy can now operate on French roads under certain conditions, to transport goods and passengers either under direct supervision or a remote control.

In Europe, this differentiation is often lacking, and all autonomous vehicles are grouped together. In many countries, this means that a human driver is expected to be present in the vehicle—which is obviously not possible for delivery robots—or at least that an operator can take over its control and navigate it from a distance. There are a few high-level initiatives that show a definite interest in robotics and AI-enabled technologies, but those are yet to translate into specific country-level regulations. For now, autonomous delivery robots are still in the shadow of autonomous vehicles, as far as legislation is concerned.