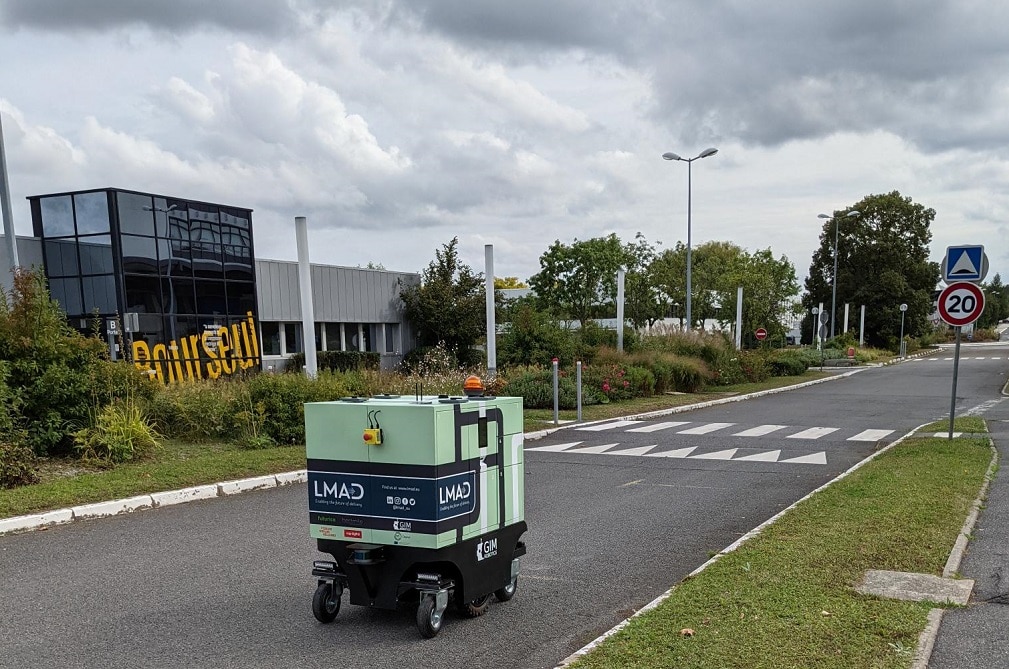 LMAD is currently working on an experiment for on-site autonomous parcel delivery at the Nokia Bell Labs Paris-Saclay Campus.

Our platform handles the last mile segment of the delivery process automatically, from A to Z. The goal of this experiment is to provide a comprehensive proof of concept for autonomous delivery at an industrial site, and also to provide Nokia with a viable and cost-efficient on-site delivery option for small parcels (under 5 kg). Currently, we’re in the test phase of the experiment, with expected deliveries by the end of 2021.

In this article, we’ll discuss the experiment’s context, goals, and challenges, and look at what we’ve achieved so far.

The experiment’s context and goals

Before starting to work on this project, we were in touch with the Nokia Bell Labs team, the R&D subsidiary of Nokia. Everything began with Nokia’s 5G Days in November 2019, an event where Nokia showcased a number of use cases and demos for 5G technology. Our autonomous robot was one of the demos that were presented, and this was an occasion to complete one autonomous trajectory in front of the 5G building.

We were also hosted at Nokia’s Le Garage, a start-up incubation and acceleration space that aims to connect and catalyze innovative projects.

Since then, we’re building a strong automated delivery process from the ground up at the Nokia Bell Labs Paris-Saclay Campus. It covers the last mile of parcel delivery: from the receipt and acknowledgment of the parcels at the local depot to the delivery at the employee’s building, all without a human in the loop—if not to watch the robot for safety purposes.

Because of Covid-19 and different project constraints, we weren’t able to progress as fast as we had initially foreseen, but for the last 2 years, we’ve done a lot of testing and improvements to our platform, and made significant progress in terms of operational knowledge and efficiency.

We’re aiming to begin deliveries to Nokia’s employees by the end of the year (2021) and to provide Nokia with a viable proof of concept of on-site autonomous deliveries at an industrial R&D campus.

The main use case is for B2B autonomous parcel delivery at Nokia’s campus.

At the campus, there’s a warehouse depot that serves as a consolidation point for all parcels, and which is operated by Sodexo. Currently, big parcels are delivered to campus locations with a delivery van, while small parcels (under 5 kg) are collected by employees at the warehouse. This means that employees need to walk or drive there, which is disruptive and takes time and effort.

We aim to start delivering these small parcels to employees with the help of our autonomous robot, as they fit in the locker compartments. At the moment, there’s no service available to cover this need.

This will facilitate parcel deliveries for employees, making them significantly more convenient to users, while also providing a cost-efficient solution to Nokia’s use case.

The robot will eventually function without a safety driver nearby.

Currently, we’re in the process of testing our autonomous on-site delivery solution; most of the flow is now working but there are occasionally edge cases we need to cater for.

Our goal is to be fully operational and deliver parcels to end users before the end of the year. At the moment, we have started the onboarding process with a few users who showed interest in participating in the experiment.

There are 15 pickup locations, as some of the buildings are big and have a few entrances. We are currently testing deliveries to a few locations, and we’re aiming to gradually expand to the whole campus.

The number of deliveries per day

The pre-Covid numbers were of about 500 per month, sometimes up to 50-60 per day, of big and small parcels alike. There were about 300 monthly deliveries of small parcels.

We aim to propose 2 daily rounds, one in the morning and one in the afternoon. This should cover the campus’ needs, as the robot has 13 compartments of different sizes.

At the Nokia Paris-Saclay campus, we have an autonomous delivery robot (ADR) developed and built by GIM Robotics for LMAD.

The robot has a navigation stack, developed by GIM Robotics, which includes:

There’s also an obstacle detection feature, which also uses Lidar to detect obstacles of any kind, such as:

The system makes the robot stop in case there’s any danger of collision: when there’s an obstacle in front of the robot, the robot stops and waits for the obstacle to move, or for the safety driver to take over. We’re also currently working on an obstacle avoidance system. 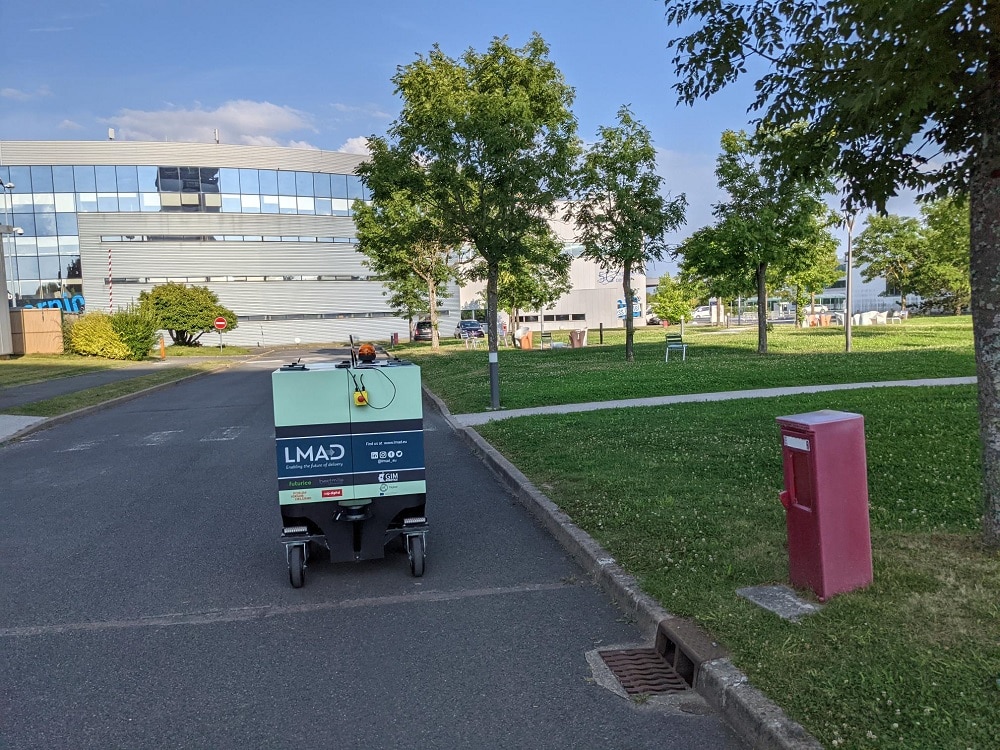 Roundabouts are another obstacle that the robot needs to overcome, and these tend to be quite challenging for robots in general. At the moment, we’re doing trajectory Teach-and-Repeat, i.e. we’re teaching the robot trajectories and then repeating them. If the trajectory goes through a roundabout, the robot can repeat it in the same way and at the same speed, and just stop if there’s a car coming. This is the way most autonomous shuttles and fixed-route autonomous services work at present.

We have recorded in advance all routes between buildings, but we’re not recording every possible trajectory: as there are approximately 15 pickup locations, there’s a lot of possible variations. We optimize routes, though, with our route optimizer, which is an algorithm that decides how the robot should move between different locations. The algorithm will always choose the most direct route between locations.

The robot is exclusively driving on the streets and not on sidewalks.

The delivery process will be, as follows:

If the recipient is not able to meet the robot to collect their parcel (f.e. if they’re in a meeting), the robot will wait for a while, and then the recipient will receive a notification, asking them to choose another time slot.

The platform has a number of features that support the use case of on-site autonomous delivery for industrial campuses:

This experiment is similar to the experiment we’re working on with EDF: in both, we are testing autonomous on-site delivery for industrial campuses, in order to facilitate deliveries to end users, and build and deploy a solution that is both cost-efficient and convenient. Due to legislative constraints regarding testing and deployment in public areas, private campuses are an ideal deployment ground for last-mile autonomous delivery solutions.