Can autonomous robots help reduce the cost of the last mile?

The demand for last-mile deliveries is increasing with the rapid growth of eCommerce, however the last mile of delivery remains expensive.

Customers, on the other hand, demand fast deliveries and convenience – and aren’t willing to give up either: 61% of them would switch providers to save on delivery costs, while 57% would find an alternative retailer if they weren’t satisfied with a previous delivery. The available choices of delivery slots are also at the top of customers’ priorities, along with real-time updates on deliveries.

Because of this, retailers are often subsidizing deliveries, or sometimes, absorbing the costs entirely. For logistics providers, this means that offering a service that is as competitive as possible is key for retaining partnerships with online stores and platforms, big and small ones alike.

How can logistics companies solve this riddle and provide delivery options to their customers that are both cheap and convenient?

Are autonomous last-mile delivery robots the answer, and if yes, when can they become an alternative to current delivery methods?

In this article, we’ll discuss these questions and see what are the possible answers.

The real costs of the last mile

While the cost of the last mile is hugely location-dependent, there are a few estimates we could use.

In 2018, last-mile delivery cost approximately $10/parcel to businesses, of which $8 were charged to customers; customers, however, were willing to pay significantly less: $1.4. 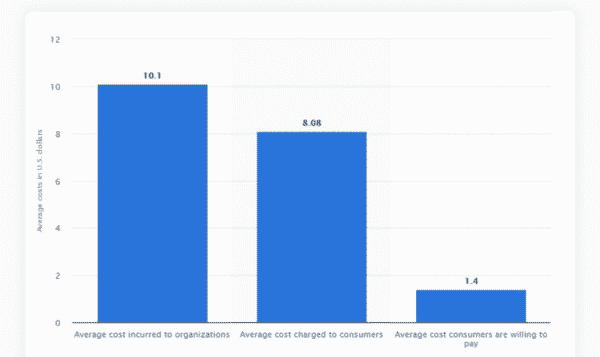 DispatchTrack puts the estimated price at a similar value: around $10.

While these prices can (and will) evolve, and are probably even higher today, they give us a good benchmark of how much the last mile costs to retailers vs. how much customers are hoping to pay. And indeed, with free deliveries becoming the norm established by giants like Amazon, customers are price-conscious and unwilling to let go of cheap deliveries.

Additionally, the last mile is the most expensive stretch of the journey of a product to its final destination: Estimates vary, but according to Insider (formerly Business Insider), the last mile amounts for 53% of the total delivery costs.

A multitude of factors impact the cost of the last mile:

On the other hand, delivery speed is also a key consideration for customers: According to Atos, 58% preferred same-day delivery, while 38% prefer expedited delivery (not on the same day); speed, however, also drives costs up, because it requires an additional operational capacity and incurs extra overhead costs.

However, to balance this out, it’s important to note that 70% of customers are willing to wait for a longer and cheaper delivery. Or, otherwise said, cost remains one of the most important considerations.

What are some of the ways to reduce delivery costs?

Although it’s difficult to estimate the exact cost of the last mile, one thing is certain: It’s expensive and, at its current setup, it’s particularly vulnerable to fluctuations of fuel costs.

So, what are some of the ways to ease that tension? There are a number of possibilities at different stages of development.

Can autonomous robots reduce the cost of the last mile?

So, are autonomous robots or vehicles a viable option for last-mile deliveries, and can they make the final stretch of the delivery route cheaper?

At the moment, autonomous robots are not yet a scalable solution that can be deployed en masse in most locations, not least because of legislative challenges – but also because of the overall maturity level of the technology. As with many emerging technologies, before they get cheaper, autonomous robots will remain expensive for a period of time, as Peter H. Diamandis points out in his book “The Future Is Faster Than You Think: How Converging Technologies Are Transforming Business, Industries, and Our Lives”.

And indeed, developments aren’t linear but depend on a large number of factors that are interwoven in a complex network – which make exact estimations impossible.

However, major leaps have been made in the past months and years on both sides of the equation, legislation and technology, and large-scale tests and consecutive deployments are getting closer. 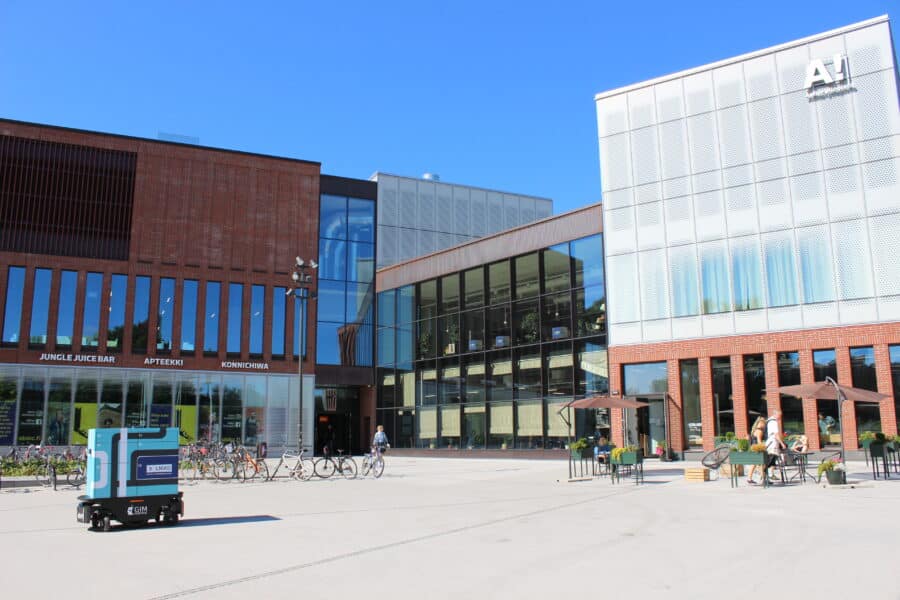 LMAD’s robot in Helsinki, Finland during one of our previous pilots

A few factors make robots a good candidate for being a cheaper alternative to current delivery methods. Robots are:

So, can robots be a cheaper alternative to existing delivery methods?

Although the exact answer to this question remain speculative (there’s no hard data yet to confirm what the possible cost reductions will be), we’re cautiously optimistic that the answer is yes, last-mile delivery robots can and will provide a viable alternative to current options, and one that will not only be cheaper but also more environmentally-friendly and more convenient for consumers.

When will this happen, though?

It’s impossible to say, as too many moving parts are involved in the equation — and McKinsey isn’t providing estimates either. In another report, they’re estimating that the technology will be sufficiently mature in a few years from now (5 to 10 years from 2018, the publishing date of the report) for robots to operate with minimal human supervision, which is an important axis of cost reduction.

Nevertheless, last-mile delivery will undoubtedly be taken over by faster, more efficient alternatives to the current options, and it’s only a matter of time to see these options being deployed more and more often.

For that reason, it’s crucial for logistics companies to start experimenting with autonomous deliveries as soon as possible and make sure they’re able to harness their potential and act fast when the conditions become right.

Before autonomous vehicles can be deployed at scale, they’ll remain an exotic (or rather, futuristic) alternative to existing last-mile delivery options – but the status quo is unlikely to stay for much longer.

The World Economic Forum is also advising both private and public players to look into possible solutions such as electric vehicles, robots, parcel pooling, and route optimization, to reduce both costs and CO2 emissions, and start their own pilot initiatives as soon as possible to explore options.

Businesses like LMAD, Gim Robotics, TwinswHeel, and many others, are paving the way for last-mile autonomous deliveries, and are receiving the support of both the public sector (via Horizon Europe) and logistics companies such as DHL. Together, they’re working together to develop, test, and deploy viable autonomous alternatives to existing delivery options that will be cheaper, greener, and more convenient.