Demand for last-mile delivery is rapidly increasing – the World Economic Forum (WEF) projects it to grow by 78% by 2030 – and because of that, its environmental impact is also expected to grow significantly in the next few years. In the light of this, it’s of crucial importance to consider all the different options we have at our disposal to reduce the carbon footprint of the last mile. So, can autonomous robots help with this, and to what extent?

In this article, we’ll discuss this question in detail. First, we’ll look at the big picture and consider a few of the possible solutions to the pressure that last-mile deliveries put on the environment.

The environmental impact of last-mile deliveries

A few key factors drive the growth in demand for urban last-mile deliveries, along with its pressure on the environment:

Online shopping is becoming extremely commonplace in Europe, as well: In the EU, 74% of internet users aged 16-74 have bought goods online in 2021. While this helps reduce individual car traffic for shopping, at least to an extent, it also means that last-mile delivery traffic is growing significantly, together with its carbon footprint, and is expected to grow even further. 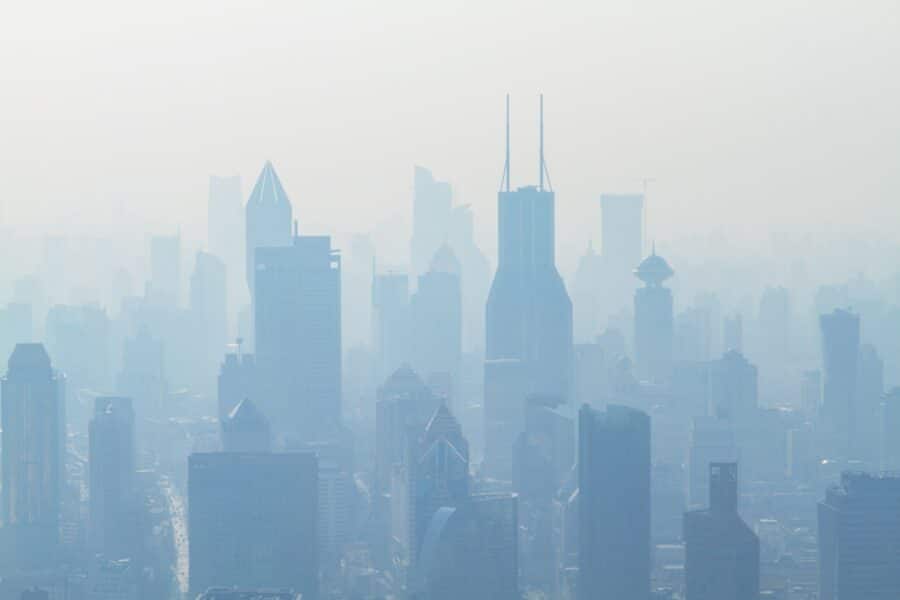 Additionally, customers grow accustomed to the standards set by Amazon Prime and other similar services. This puts a significant strain not only on logistics providers, but also on the environment, and is likely not sustainable at all with the delivery methods we currently use.

According to one case study in Mexico, fast shipping increased CO2 emissions by 15%, which was mainly attributed to the need to dispatch goods more frequently, posing a challenge for the consolidation of deliveries.

So, how can we solve the challenges of the last mile and find sustainable alternatives?

What are the possible solutions to reduce the environmental impact of last-mile deliveries?

There are a few ways to minimize the ecological footprint of the last mile by optimizing deliveries. Let’s take a look at a few of them.

Delivery robots have a much lower power consumption than cars or vans because they’re smaller. Additionally, they’re electric, which further reduces carbon emissions, and with the help of the right software platform, operations can be further optimized to reduce pollution.

Drones can be a viable alternative for remote areas, but are unlikely to be permitted to operate in cities.

Static lockers are another possible solution for dense urban areas. Although goods aren’t directly delivered to customers’ doorsteps, they’re available to be collected at any time. Lockers require permits to be constructed, and are usually owned by a specific retailer or logistics company (Amazon or DHL, for example).

Manned delivery locations are another alternative to direct delivery, one that is currently prevalent in urban centers. Delivery centers are somewhat easier to set up than lockers, as they’re using already existing infrastructure and assets to add new services and providers.

Electric vehicles are another viable alternative to diesel cars or vans, and they help reduce CO2 emissions in cities considerably. Nevertheless, traffic congestion remains a problem.

Food delivery (both of hot meals and of groceries) is a niche where bike delivery options are plentiful, and many companies have built their operations around them: Foodora, FoodPanda, Deliveroo, UberEats, and more. Bike couriers still offer efficiency, agility, and speed that is difficult to beat – and that is crucial for food deliveries.

Cargo-bikes are another alternative for parcel logistics. They’re relatively cheap to deploy, because they don’t require a large investment in technology or infrastructure, but their output might be inefficient – humans can only work for a specific number of hours each day.

In addition to that, bike couriers’ working conditions are often suboptimal and the pay for such jobs can be quite low, which places workers in a vulnerable position. We believe that human operators can have a more meaningful role in the supply chain by using their skills and time more efficiently.

How can autonomous delivery robots help?

Autonomous delivery robots can help alleviate pollution and reduce carbon emissions in several ways. Let’s look at the main ones, along with some examples from LMAD’s experience:

Of course, the production of electricity itself is not carbon-neutral, but in combination with the global pressure towards greener electricity, electric transportation is considerably less polluting.

It’s important to note that carbon emissions during the delivery cycle itself (at the delivery area) are zero: Robots don’t emit any CO2 emissions while operating, so they’re ideal for dense urban areas that already struggle with air pollution. There, polluting vehicles should ideally just come to a meeting point to load robots and then let robots handle the last mile. 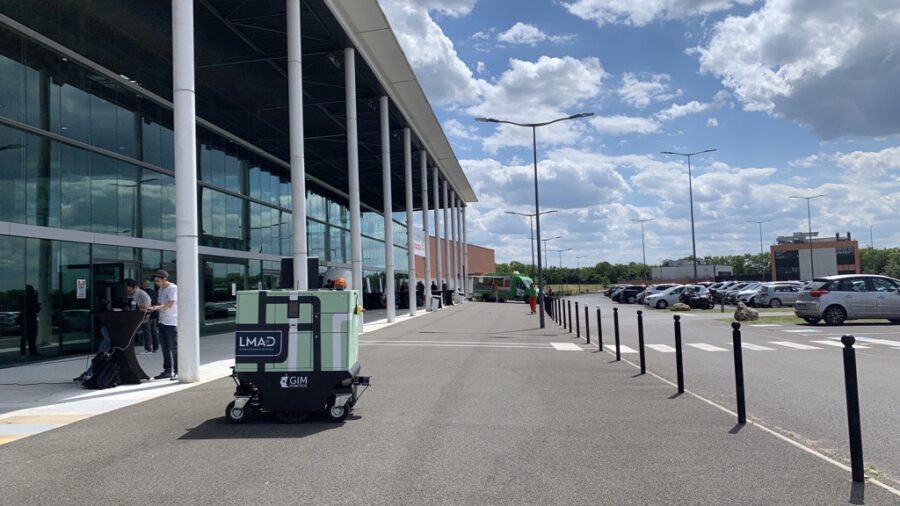 Autonomous robots benefit from the research and development efforts in the automotive industry, which is much bigger and more impactful at the moment, and can make use of its advances, as well.

The SPO2, the robot we’ve used for our pilot experiments in Finland (produced by GIM Robotics) has a standard operating time of 8 to 12 hours, and a charging time of 4 to 8 hours. It’s equipped with an extendable Lithium-ion battery pack, and with a full charge, it can drive for more than 20 km.

Newer versions of TwinwHeel’s Cithy L and Cithy M robots will have replaceable batteries, which enable it to operate continuously. Its battery autonomy is approximately 20 km, as well.

Perhaps one of the most important advantages of autonomous robots is a rather obvious one: They’re much smaller than traditional delivery vehicles (cars or vans) and their power consumption is therefore also much lower. This helps further reduce air pollution from last-mile deliveries operated by autonomous robots.

Cooperative driving systems, where vehicles communicate with each other or with the infrastructure automatically, could also help lower power consumption and reduce pollution. This area is under development in relation to passenger traffic in particular, but is also relevant for the transportation of goods.

Route optimization (with the help of AI and ML technology) is another crucial component enabling autonomous robots to reduce the carbon footprint of the last mile. It can take many forms:

Air pollution is not the only factor we should consider, though. In addition to that, autonomous robots can also help:

Congestion is an important factor to consider, especially in inner cities where space is scarce. This is why alternative delivery solutions need to operate efficiently in densely populated areas, as well.

Regardless of their net carbon footprint in the area, if they have a negative impact on congestion, they are further complicating the problem, instead of solving it: congested routes mean frequent stops for all participants in traffic and an overall increase in gas consumption.

Sidewalk autonomous delivery robots have no negative impact on traffic congestion, while robots that operate on roads need to be carefully managed in order to mitigate potential negative effects. Nevertheless, optimizing the last mile of delivery with the help of autonomous vehicles can have a definite positive impact on congestion in cities.

Autonomous delivery vehicles are much quieter than standard delivery vans; in dense urban areas where noise pollution is an issue, this can be a definite benefit.

Can autonomous robots help in different last-mile scenarios and use cases?

Autonomous robots could be used in a number of contexts and for different use cases which extend beyond B2C eCommerce deliveries. In all of them, they could have a positive impact on the environmental challenges of the last mile.

Here are some examples of use cases where autonomous robots can help:

Autonomous delivery robots can significantly improve the ecological strain of the last mile, but there are still a number of important challenges and considerations to make.

For example, it’s crucial to consider the whole production and delivery cycle of robots, including:

To come up with the right solutions – and the right robots and operational models – we should consider the options that robots are replacing and compare the ecological footprint of each.

Considering all this, how could we further optimize autonomous deliveries to make a real difference on the ecological footprint of the last mile?

There are multiple axes of improvement, but the most important one is to expand operations beyond experiments and move towards deployments: Deployment at scale is what will make a real difference in the impact on the environmental footprint of the last mile, and also lower costs for everyone involved.

For large-scale deployments, the right legislation is needed, as well as mass adoption of autonomous technologies by logistics companies, whose involvement and investments are critical for the development of the sector. And indeed, the most forward-thinking logistics companies – like DB Schenker – are actively experimenting with autonomous last-mile delivery solutions and are working on different use cases where delivery robots can make a difference.