Key challenges for the future of autonomous delivery in Europe

Earlier, we’ve outlined some of the major challenges that autonomous delivery faces, and also some of the possible solutions and approaches to these obstacles.

In this article, we’ll concentrate on the present state and the future of autonomous delivery in Europe in particular, and look at what the different European actors are doing to overcome challenges and start deploying at scale in the next few years.

It’s clear that the US and Asia are ahead of Europe due to the headstart they have had in terms of testing, experimentation, and commercial operations in recent years. This is favored by a regulation that is much more flexible, as well as by the fact that many areas are much less densely populated than most of Europe.

Europe hasn’t always been lagging behind, though: in fact, the first autonomous freight vehicle in the world was the German VaMoRs, designed by Ernst Dickmanns, which in 1987 cruised driverless on an empty highway in Germany, equipped with primitive cameras and sensors. (You can see a video of it here).

Let’s look at the key challenges autonomous delivery for the last mile is facing in Europe, as well as at the solutions different actors are coming up with.

Legal challenges are still a major obstacle in Europe

Obviously, for investors and operators to design, deploy, and operate autonomous delivery services, a formal legal framework is necessary.

In the EU and other European countries, legal challenges seem to be among the hardest to overcome for the moment, although the legislative landscape seems to be evolving fairly quickly, even for autonomous vehicles transporting passengers, which is generally an area where more conservative security measures are applied.

Germany has allowed Level 3 autonomous vehicles to operate on certain roads as early as 2017, and Mercedes-Benz’s Class S are the first vehicles capable of Level 3 automation that have received regulatory approval to operate on German roads under certain conditions. The rollout of Mercedes’ Drive Pilot’s system is scheduled for early 2022.

France is also making strides towards adopting its legislation to autonomous vehicles for the transport of goods and passengers, with a new decree on autonomous mobility and liability known as the “LOM” law (“Loi d’orientation des mobilités”, or Mobilities’ Orientation Law) that came into force in September 2022.

In 2020, the same law allowed autonomous shuttle experiments to take place in predefined areas, with a specific decree for delivery robots, which sped up the launch of delivery pilots. As of 2022, the same law now permits the movement of autonomous vehicles and the sale of robot- and droid-enabled delivery solutions.

As outlined in a 2021 McKinsey survey, “What’s next for autonomous vehicles?”, executives across all three regions (Europe, North America, Asia-Pacific) view regulation as the main bottleneck to deploying autonomous vehicles at scale. In Europe, regulation was seen as the major bottleneck by 70% of respondents, compared to 50% and 52% in North America and Asia, and compared to customer demand (6%) and technology (24%).

On a higher level, the European Commission supports the development of a Connected and Automated Mobility (CAM) framework and aims to encourage cooperation between different actors who play a role: public authorities, cities, citizens, and businesses.

At the moment, no EU-level autonomous delivery legislation exists, though, so each country defines its own approach to granting authorizations for the development, testing, and deployment of autonomous delivery solutions. This trend is likely to stay for the next few years, or at least until the European Commission prioritizes common legislation for autonomous vehicles across the EU.

Operational and technological challenges are similar as in other countries

For now, such initiatives aren’t yet in place, both due to legislative gaps and technological challenges. Nevertheless, smaller deployments are steadily paving the road towards large-scale autonomous operations by helping build momentum and gain the acceptance and trust of both the general public and local authorities.

For this reason, even smaller investments provide an incredible value: although the immediate return on investment might be difficult to track, they help build brand awareness, positioning companies at the forefront of new solutions to tough logistics challenges.

The automotive industry’s forecasts for the Level 3 and 4 autonomous vehicles (i.e., vehicles which, in a given traffic configuration, can be fully autonomous), indicate that from 2022 or 2023, we’ll have sufficient technical maturity for mid-size and large deployments of last-mile autonomous delivery solutions.

Research and investments are picking up; large-scale deployments will follow

Will last-mile autonomous delivery operations be deployed at scale in 2022 in Europe?

For now, this remains unlikely: pilot tests and deployments are still sparse, although they’re picking up progressively, and will be more and more frequent in the next few years.

Progress is slower in Europe than in other parts of the world, which is evidenced by investments: in Europe, startup funding for last mile solutions received $2,9 billion in 2020, compared to $9,4 billion for North America and $8,3 billion for Asia. Nevertheless, both research and investments are picking up, and deployments will inevitably follow – although probably not at a large scale in 2022.

Large automotive corporations are taking interest in last-mile deliveries, too: Ford is investing in the research and development of autonomous solutions, with its European Self-Driving Vehicle Research Programme.

Two projects under this program were completed in 2021:

In the two, the vehicles used were not actually autonomous; rather, a hidden driver was navigating them. The goal of Ford was not to test the technology itself, but rather to work with business customers on defining use cases, exploring solutions, and developing a proof of concept.

At the same time, Ford was also looking to test acceptance from the general public when no driver was visibly present. This seems to be a rather cautious approach to testing new alternatives to current delivery methods, and rather limited in scope, but it shows a clear interest in autonomous deliveries even from the biggest automotive companies.

Volocopter, a German aircraft manufacturer that is currently working on different urban air mobility projects, including a delivery drone, was backed by the parent company of Volvo Cars, Geely. In September 2019, Geely led a round of funding for Volocopter that helped raise $55 million in private investments.

Testing and deployment areas in Europe

In Europe, city councils are often hesitant to grant authorization to autonomous delivery operators and allow them to deploy fleets in city centers, due to the lack of a well-developed legal framework on a national level, leaving them with lots of complex issues to solve on a case-by-case basis. Additionally, technologies do not always have the necessary maturity to deploy in complex urban environments.

Nevertheless, there are a few very proactive cities that are actively looking to attract tech companies and to encourage the development of innovative delivery solutions: Helsinki, Hamburg, Milton Keynes, and more.

In parallel to that, cities’ administrations are progressively diverting traffic away from centers, or at least limiting it to specific time windows. This means that centers are becoming increasingly inaccessible to delivery vehicles, while the population has the same (and increasing) delivery needs. 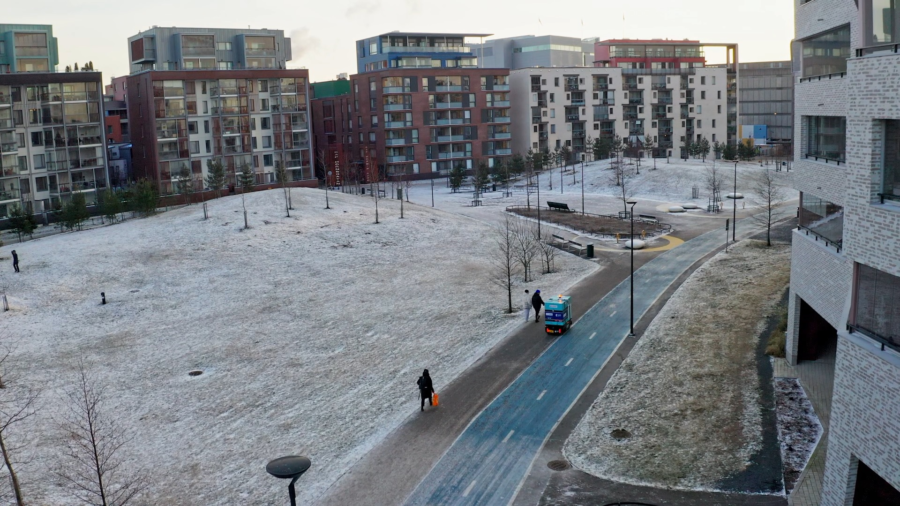 LMAD’s robot in Helsinki, during our latest experiment with DB Schenker (in December 2021)

Electric vehicles are also more and more present in city centers: while this trend expands to manned delivery trucks and vans as well, autonomous delivery vehicles make up an important part of it, as they’re nearly always electric.

Autonomous delivery robots and vehicles (ADRs and ADVs) can help decongest busy centers and are a viable and ecological alternative to delivery vans. That’s a hypothesis we’re currently testing in our pilot experiment in Helsinki, Finland. In the Jätkäsaari area, which is predominantly residential, big delivery vans stick out and look out of place, while our delivery robot (developed by GIM Robotics) is seamlessly zipping between delivery spots and has been met with curiosity and lots of positive attention from the neighbourhood’s residents.

European cities are, however, likely to remain rather conservative and cautious when granting authorizations to operate to logistics providers for autonomous last-mile deliveries, at least in the next year or two.

In this context, industrial sites offer an ideal testing and deployment ground for autonomous delivery solutions:

For decades, forward-thinking European businesses have been looking into streamlining operations at large industrial campuses, but up to now, this has usually happened through incremental improvements in terms of production and manufacturing, rather than logistics. This is starting to change, first with automated lift trucks (like Balyo), but also with delivery robots for the last mile, like LMAD’s.

Let’s now look at some of the companies that are currently doing experiments or developing solutions for last-mile autonomous delivery in Europe.

LMAD is currently among the first European companies to work on robot-agnostic autonomous delivery solutions, where logistics operators can adapt operations to any fleet of robots they choose. We’re working on different POCs (proofs of concept) for several use case scenarios with our partners, both B2B and B2C. 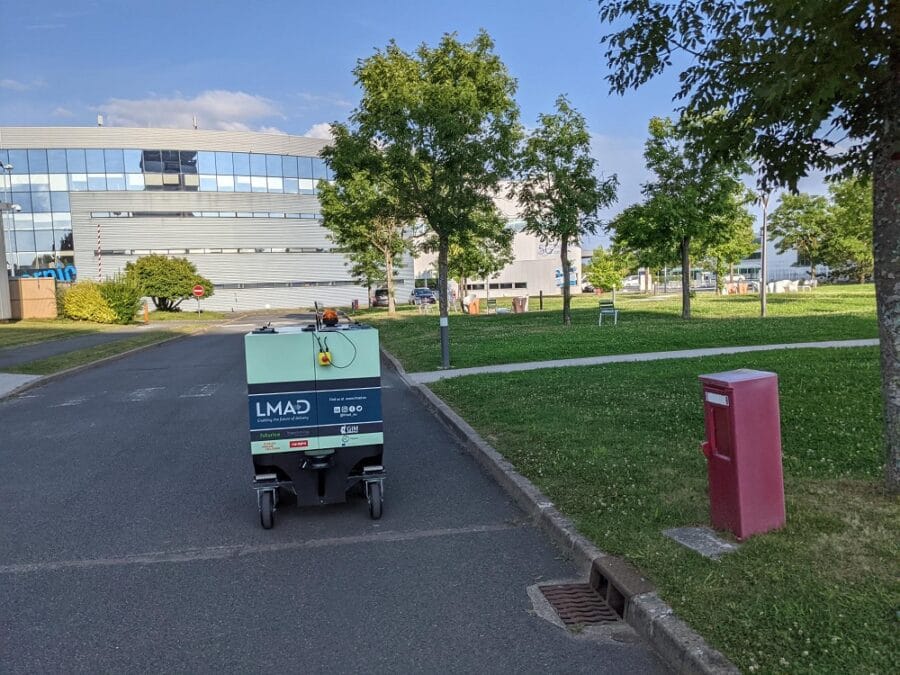 LMAD’s robot on site, during the test phase of our experiment with Nokia (2021)

In 2022, we’ll continue working on these three experiments, and we also have an experiment with a Level 4 autonomous vehicle in a French city center lined up. This will be a major breakthrough for the French landscape of autonomous delivery, so we’re particularly excited about it. Stay tuned for more information!

In these pilot experiments, we’re aiming to build a working POC and demonstrate to logistics providers how they can optimize operations and improve their delivery services.

The British company Academy of Robotics has been testing last-mile deliveries with their delivery bot, Kar-go.

For the moment, Kar-go is operating on a small scale and at a purely experimental level, but the company behind the project is currently preparing for a round of fundraising. The robot has already received approval from the DVSA (Driver and Vehicle Standards Agency) and the DVLA (Driver and Vehicle Licensing Agency) in Britain.

TwinswHeel is a French delivery robot manufacturer that has developed a number of autonomous robots, some of which are currently being tested at different locations in France, including cities. In our experiment with EDF, we’re testing deliveries to employees at an industrial site with a TwinswHeel robot. 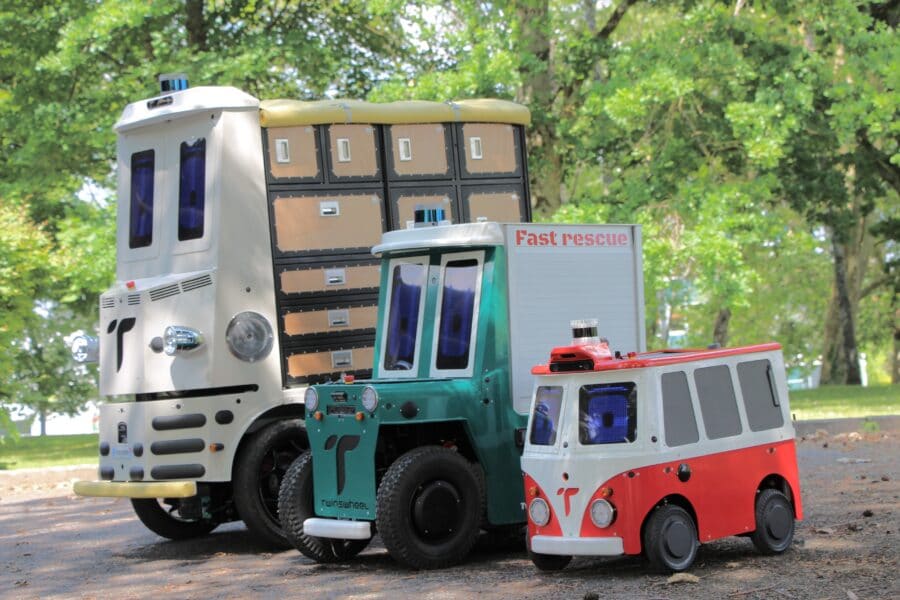 Cleveron is an Estonian company building smart parcel lockers and robots, aiming to streamline parcel delivery to end customers. Their Cleveron 701 has already obtained a license to operate in public areas in Estonia, and can be adapted to many different use cases and types of parcels. Cleveron have already conducted multiple real traffic tests in the country.

Volocopter is a German aircraft manufacturer that is currently developing different urban air mobility projects, including the Volodrone, a delivery drone. In September 2019, Volocopter secured $55 million in funding, with the support of Geely, Volvo’s parent company.

StreetDrone is an UK-based company that offers subscription-based autonomous driving software, and has developed a delivery vehicle, Pix-e, an electric lightweight delivery vehicle capable of driving at a maximum speed of 20 mph (32 km/h) and delivering within a range of 80 km. In September 2021, Wilko, a British retailer, invested £3 million in StreetDrone, in a bet to gain a competitive edge by deploying autonomous deliveries faster than its competitors.

Is Europe ready to face the upcoming last-mile delivery challenges?

Last-mile delivery has always been complex to optimize, and also the most expensive link in the supply chain. In addition to that, demand is increasing, as eCommerce is gaining traction: 73% of internet users in the EU have made online purchases in 2020, and for 2021, this number is likely even higher.

At the same time, pressure is increasing to find reliable, efficient, and ecological solutions for the last mile that are both cheaper and user-friendly. Autonomous delivery robots are proving to be a viable solution, but high-level support on a European level is a must: the sector can largely benefit from a more comprehensive legal framework, which will help drive investments and innovation.